The Genesis Flood and the Atrahasis Epic 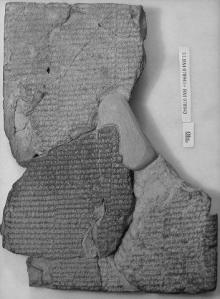 The Atrahasis Epic is an account from Babylon of the creation of the world and a great, world-wide flood in which all of mankind died except for one family.  They escaped on a boat after being warned by one of the gods.

The most complete record of the epic is about 1200 lines on three stone tablets, dating from the 17th century BC (perhaps 200 years before the time of Moses).

There are significant similarities between the Atrahasis Epic and the Genesis account of the flood — enough to cause widespread scholarly discussion.  Nor is this the only ancient record of a world-wide flood which destroyed all of mankind.

Another is the Gilgamesh Epic (7th century B.C., from Nineveh).  The hero is warned by a god of a worldwide flood, and he builds a boat and escapes with his family and some of every kind of animal, while the rest of mankind is destroyed.  After his boat comes to rest on land, he sends out three birds, the last a raven which does not return.

For those familiar with the Biblical account, the parallels between these stories and the Genesis record are fascinating.  They do not prove the truth of the Bible any more than the Bible proves that they are true.  But if such a significant event as a worldwide flood did take place, as the Bible says it did, we would expect it to be mentioned by others besides the Hebrews, and that is exactly what we find.

Pardon Me, Your Presuppositions are Showing

T.C. Mitchell, in The Bible in the British Museum:  Interpreting the Evidence, suggests three possible explanations for the remarkable similarities between the Biblical and Mesopotamian accounts:

He says the second explanation is unlikely and closes with this:  “…in the final analysis, the decision between the other two is a question of individual choice on the basis of personal presuppositions.”

I would suggest that Mr Mitchell’s presuppositions are very much in evidence — there is another possibility he hasn’t even considered.

Perhaps, just perhaps, these are completely independent witnesses to an event that actually happened.  The people of Mesopotamia rejected the one true God.  They could not deny the flood (everyone in their day knew of it) so they changed their account to make it the work of invented gods, not the true God of Noah.  Their account of it is twisted by their own self-interest in denying God, but they still give independent testimony to the fact of the Flood, and to some of the details.

It makes more sense to see it that way — unless you pre-suppose that the Bible isn’t actually true, and that the flood recorded in Genesis didn’t happen.  Then, you’ll look to other explanations, such as Mr Mitchell has provided.

What is Your Story?

There’s something else worth noting here, even if you aren’t interested in Biblical archaeology — the differences between the accounts tell us something.

In the Genesis account, man’s actions are very evil, and a righteous God judges the evil.  The human “hero”, Noah, is weak and imperfect, but a merciful God keeps His promises of a Saviour for mankind, and preserves a remnant.  This is all very credible — everyone knows people can become very wicked, everyone thinks that if there is a God, He should be just and righteous and shouldn’t let evil people just run wild, and everyone would expect God to keep His promises.

In the Mesopotamian accounts, the gods are capricious.  Mankind must die simply because too many people are too noisy, and it annoys the gods.  One god warns the hero, Atrahasis (or Utnapishtim), who builds a boat.  When the flood comes, the gods weep at the destruction, and Atrahasis-Utnapishtim becomes immortal after the flood.  The gods decide to let humanity live, to do all the work and give them sacrifices to eat.

Seems like a very ridiculous story to me.  When people don’t want to face up to their sin and its consequences, what do they do?  Make up a silly story, and blame God (or the gods), who are powerful enough to do a lot of damage but completely unreasonable.  Man is the hero, and the gods are, at best, capricious and untrustworthy.

We’re much more advanced in our excuse-making today.  We don’t blame Sumerian gods for things that go wrong.  We might blame God (making him out to be unreasonable just like the Mesopotamians did), or we might blame the government, or our boss, or our spouse, our parents or neighbours.  There are so many people to blame, after all, that we never have to stop and consider whether perhaps our own actions might be part of the problem….

I’ve just acquired a book by Peter Masters (pastor of the Metropolitan Tabernacle in London, formerly Charles Spurgeon’s church), Heritage of Evidence in the British Museum.  This appears to be a superb work, especially if you are intending to visit — it is laid out as a tour, taking you from room to room.  He writes from a believer’s perspective, and the book has excellent colour photographs.

Dr Masters says these items are in Room 55, but the British Museum website appears to suggest that the Gilgamesh Epic, at least, is in the Nineveh room (Room 9).  If you are planning to visit and want to see these, consider contacting the British Museum first to find out where they are on exhibit.

1 Response to The Genesis Flood and the Atrahasis Epic