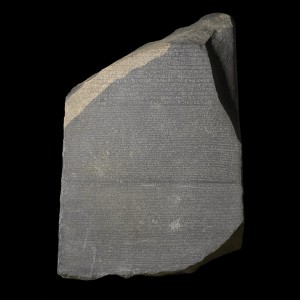 Room 4 in the British Museum (Egyptian Sculpture) has several things of note to those interested in Biblical history.  One of the most famous items in the museum is the Rosetta Stone.

Egyptian hieroglyphics were no longer used by the fourth or fifth century A.D., and before long no one knew how to read them — until some of Napoleon’s soldiers found the Rosetta Stone in 1799.

Why the Rosetta Stone Matters to Bible Students

The text of the Rosetta Stone is not of particular interest (if you feel bored:  Rosetta Stone translation).  It is a decree from 196 B.C. on behalf of Ptolemy V.  Daniel prophesied the rise of the Greek Empire and its four-fold division, and the Ptolemy kings were part of the fulfilment of his prophecy, but there is other evidence for that fulfilment, anyway.

The Rosetta Stone matters because it unlocked the key to Egyptian hieroglyphics.  The inscription is in ancient hieroglyphics, Demotic (the everyday “document language” of Egypt), and Greek.  By comparing the Greek (which could be understood) to the hieroglyphics, scholars deciphered the hieroglyphic text.  With what they learned of hieroglyphics from this text, they were able to decipher others.  As a result, ancient Egyptian documents and inscriptions can be read today.

Of course, the Bible wasn’t written in hieroglyphics, but the ability to read Egyptian history increases our understanding of some Biblical details.  For instance, God said (Exodus 12:12) He would bring judgment “against all the gods of Egypt” — and now that we know more about those gods, we understand how the ten plagues of Egypt fulfilled that promise.

The ability to decipher hieroglyphics means scholars can read the Ipuwer Papyrus, an ancient document which says the Nile turned to blood — possibly referring to the first of the plagues.  A hieroglyphic inscription mentions a period of darkness, perhaps a reference to the ninth plague.

Many records match the Biblical account, or shed further light on it — records which could not be read before the Rosetta Stone was found.  We can now read the Dream Stela of Thutmose IV, after the Exodus, and learn that he was not the crown prince (the first-born crown prince died in the tenth plague).  Now, we read of Hatshepsut, possibly the daughter of Pharaoh mentioned in the second chapter of Exodus.  For an example of the detailed scholarly studies which have resulted from Egyptian history, see Amenhotep II and the Historicity of the Exodus-Pharaoh.

We did not need the Rosetta Stone to understand the Bible, but the opening of Egyptian history to us helps to both confirm the Biblical account and shed extra light on some of the details of Scripture.

Napoleon — and the Rosetta Stone

Napoleon Bonaparte, increasing his power in France in the late 18th century, cast his eyes towards the great wealth Britain was gaining from its colony in India.  He saw Egypt as the key to India, and thus began his ill-fated Egyptian adventure.  He took Malta, and won battles in Egypt, but Horatio Nelson destroyed his fleet in the Battle of the Nile in August 1798.  Eventually, his entire campaign collapsed, and Napoleon returned home, gained complete control of France, and led his armies in the conquest of most of Europe.

The most brilliant strategist of his time made a horrible mistake, involving his army in a campaign that (given the weakness of his fleet) had little chance of success.  There isn’t much to show for all his efforts, all the ships and men he lost — except the Rosetta Stone, and what it tells us of Egyptian and Biblical history.

The king’s heart is in the hand of the LORD, as the rivers of water: he turneth it whithersoever he will.

Sources for this series:

1 Response to The Rosetta Stone