“We Need to be Really Worried” 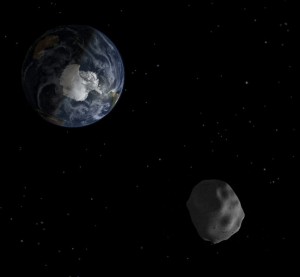 The BBC seized on the meteor strike in Russia and the passing of an asteroid within 17,000 miles of earth yesterday to tell us to worry about asteroids.

“People think that in this day and age we’ve got this problem covered.  We’re far from covering this problem, believe you me.”

I believe you, Dr Lowry.  I thought by now scientists would have all the asteroids tracked, because I’ve been worrying about this ever since I heard something about some movie about an asteroid.  But when a scientist says there’s a problem, there must be a problem.

If scientists don’t have it covered, perhaps government should step in.  A parliamentary debate and spending more government funds will solve every problem, won’t it?

The key number is objects around a hundred or a few hundred metres.  Those are the ones we need to be really worried about, and trying to observe the skies more so we can catalogue all of them. But we’re quite a way off actually doing that.

We need to worry, because an asteroid this size could wipe out Greater London, which might cause BBC broadcast disruptions, job losses, and bank bailouts.

A meteorite strike can be a very serious matter.  Almost 1000 people were injured yesterday, and it could be far, far worse.  But we’re talking about the imperative to worry here.  The BBC, once again, has commanded it.

This gives me a problem.  I’ve dutifully followed the instructions of the BBC for a while now.  I’m busy worrying about the euro, budget cuts, global warming, the impact of budget cuts on the elderly, the fact that guns aren’t registered in America, the fact that registering guns hasn’t worked in South Africa, NHS budget cuts, badger culls, neo-Nazis, education budget cuts, whether David Beckham will help or hurt PSG’s team, the epidemic du jour, budget cuts for the long-term unemployed, Tory/Lib-Dem divisions, the drastic impacts (if any) of fracking, triple-dip recession, the impact of budget cuts on some victim group / special interest I’ve never heard of before, the fiscal cliff, the latest sounds to escape Vince Cable’s lips, the mental health of hedgehogs, horse meat, a swimming pool closure in Yorkshire, GM foods, the impact of budget cuts on councils’ ability to cope with severe winter weather, racism in football, and all the other things they’ve told me to worry about which I forgot.

I’m also worried that the press, with the BBC leading the way, has so filled our minds with worry that even the scientists they interview just regurgitate “need to worry about it” phrases without even thinking about it.

A Gun at Your Head, but Don’t Lose Sleep

But back to asteroids.  What will worry accomplish?  Well, we might sometimes be able to know if they are going to hit, with a few hours notice, and if that happens, “if we did spot one of these objects on an impact trajectory, we do have the capability to assess its risk.”

Wow, do I feel better!  We could assess risk!  We might be able to deflect the little ones (the ones that break up before they hit earth, anyway).  No one has the least clue whether we could deflect the bigger ones, the ones that would really do some damage.  (I like the paint ball idea.  If an asteroid is taking us out, we could at least plaster it with paint first.  That meteor entered the atmosphere at 33,000 mph!  That’s going to take some paintball shot!)  But if we worry enough, we might at least get ourselves to the situation where we might spot one of these early enough to assess its risk before it hits.  What a pay-off that would be for our years of worry — to be able to assess risk.

Mankind has always had this gun pointed at its head; we’re just lucky we’re in a time when we have the technological capability to search for these things and try and develop a way of dealing with them.

But don’t lose any sleep about it.

Well, OK.  (How did that “mankind” slip past the BBC political-correctness experts, by the way?  Chances are high it gets changed before you read it.)  I guess this is a “worry only in the daytime” kind of worry, one that we forget at bed-time so we don’t lose sleep.

“Daddy, can I have a bed-time story about asteroids?”  “No, dear, we only talk and worry about them during the day.  That’s what the scientist said, and we have to accept the science.  It’s global warming again for your bed-time story tonight.”  “Oh, Daddy, I’m bored with that, can you do Mr Cable?  He’s always funny.”

Christ Made Fun of This Stuff

Christians need to discard the “worry” culture.  It is silly to worry over things that you can’t do anything to change.  Even the Lord Jesus made fun of this a little bit.

Which of you by taking thought can add one cubit unto his stature?

Too bad.  Hate to break the news, but you can’t increase your height by more than a foot by thinking about it.  Millions of NBA hopefuls emit a loud sigh (the atmospheric disturbance will, no doubt, increase global warming somehow or other).

Yes, I think Jesus expected His listeners to laugh at this.  They all knew they couldn’t even add an inch by thinking about it, and He went for the whole cubit.  Worry is ridiculous, and He made it look so.

But it Isn’t Just a Joke

Worry is not only silly, it is sin.  Jesus went on to say:

That is our Lord and Saviour saying that.  It is an instruction, not merely a piece of good advice.  The future is God’s remit.  Sure, an asteroid could kill you tomorrow.  So could a car crash, or choking on your lunch.  God expects us to drive carefully and chew our food well, but the time of our departure is His.

14 But I trusted in thee, O LORD: I said, Thou art my God.
15 My times are in thy hand: deliver me from the hand of mine enemies, and from them that persecute me.

6 Humble yourselves therefore under the mighty hand of God, that he may exalt you in due time:
7 Casting all your care upon him; for he careth for you.

Pastor of Free Baptist Church of Glenrothes
View all posts by Jon Gleason →
This entry was posted in Daily Christianity, Thoughts on the News and tagged asteroid, trust, worry. Bookmark the permalink.

11 Responses to “We Need to be Really Worried”