“They Stole our Hot Chocolate!”

Some of my readers know about one of our family traditions.  In our house, the kids only get hot chocolate on days when there is frost or snow.  If it is falling snow, there have to be 100 flakes in a day.  But if the snow is lying on the ground, it counts as long as it is still there at some point in the day.  This is VERY IMPORTANT!  🙂

Some years back, our kids got a great idea after a snowstorm.  They rolled a giant snowball and left it in the middle of the front lawn.  THAT would make the snow last longer, which, of course, meant more hot chocolate!

It was about a week after all the other snow melted.  The sun was shining, it was maybe 12-13 Celsius (around 55 Fahrenheit), and I’d gone upstairs for something.  I happened to look out the window when a car stopped out front and four young men (probably aged 18-20) got out.  They were pointing and laughing at our snowball, which was still perhaps 12-18 inches in diameter (edit: I’m informed in the comments it was bigger than that 🙂 ), sitting in the middle of our green lawn on a sunny day in early spring, and I was looking out the window enjoying the sight of their amazement.

Suddenly, two of them ran over, picked it up, ran back to their car, and drove off!  I called out, “Someone is stealing the snowball!” but it was too late.  My daughter said, “They stole our hot chocolate!” 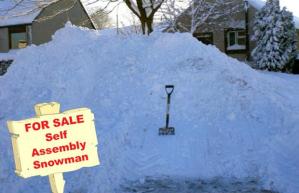 A couple of years later, we had a really heavy snowstorm, and Fife Council was really not ready.  They didn’t have enough salt, they didn’t get the roads cleared — it was a mess.  Finally they cleared our street, leaving a massive pile of snow in the parking bay right outside our house.  We’ll have hot chocolate forever!  That will last until June!  We called it “Mount Snowplow.”

A few days later, there were complaints about the huge piles of snow all over town (people here really aren’t used to a lot of snow).  With forecasts of another storm, there were concerns they wouldn’t have a place to put more snow, with all the piles of snow already there.  They brought tractors around, loaded the snow into trucks, and hauled it away to dump somewhere.  “They’re stealing our hot chocolate!”

OK, it’s a fraction of the size of Mount Snowplow, but still, it’s about 5 1/2 feet high (with the possibility of growing even more in the next couple days).  And next week, we’re supposed to get a really hard freeze, which will harden it.  I won’t be surprised if it lasts much of April, and who knows?  Maybe even into May.  Hot Chocolate forever!  We call it “Hot Chocolate Insurance.”

Except, it won’t be forever.  In terms of the calendar year, it’s going to be gone fairly quickly, no matter how much snow we get and throw on top of it.  No matter what happens, no matter how big we build it and what we do to try to protect it, by June we’ll be out of hot chocolate season and waiting for the first frost next autumn.

Anyone who is counting on Mount Snow Shovel to insure that they will have “hot chocolate forever!” is in for a grave disappointment.  This “Hot Chocolate Insurance” policy is going to expire — it’s just a matter of time, sun, and (especially in Scotland) rain.  It’s ok, though.  You reach the point of not minding too much — hot chocolate loses some of its appeal when you have it every day, whenever you want.

“Hot Chocolate Insurance” is no more (or less) dependable than the things people count on to insure their own happiness — money, family, fame, pleasures, the satisfaction of having done good deeds, you name it.  You can stockpile these things, try to protect them from thieves, sun, and rain, but the inevitable is still inevitable.  They may seem to work for a while, but the satisfaction they give lasts only so far, and the end is coming.  If your life is built on earthly treasures, you might as well have been shoveling snow.

14 Responses to “They Stole our Hot Chocolate!”