This is the Black Obelisk of Shalmaneser III of Assyria, in Room 6 of the Museum (more detailed description).  It may bear the only extant depiction of an Israelite king, Jehu of the northern kingdom of Israel during the time of the divided kingdom described in I & II Kings.

The obelisk shows someone in Israelite dress kneeling as he brings tribute.  The inscription says it is the tribute of “Jehu son of Omri.”  It does not say whether this is intended to be a depiction of Jehu himself, or of a messenger he sent with the tribute, so we do not know if this is actually Jehu. 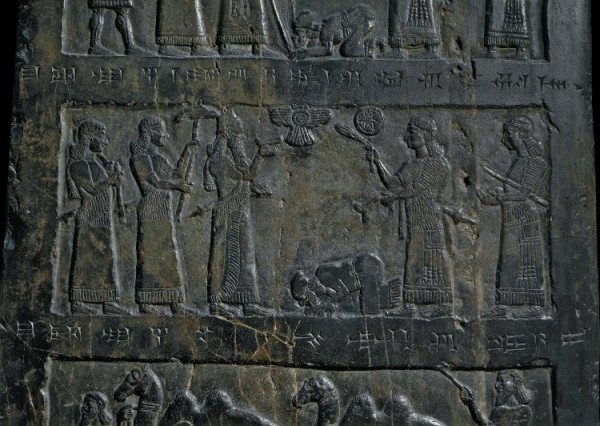 This is the interesting panel, as far as Biblical history is concerned.  The kneeling figure is presenting Jehu’s tribute.  Whether Jehu actually came with the tribute is unknown.  This was the work of a sculptor back in Assyria who probably wasn’t even present, a sculptor who was more concerned with pleasing the king than he was with his portrayals of the other individuals on the monument.

Shalmaneser III was not the Shalmaneser of the Bible (II Kings 17:3, 18:9).  Shalmaneser V destroyed the northern kingdom (though he died sometime around the end of the siege of Samaria and Sargon II took the throne).

Despite the inscription, Jehu (tenth king of the northern kingdom) was not really the son of Omri.  He reigned during the time of Shalmaneser III, and ruled after the fall of the house of Omri.  And that brings us to an item right behind the Black Obelisk in the British Museum.

The Kurkh Stela, to the left here, pictures Shalmaneser III and celebrates victories at various battles, including the battle of Qarqar (perhaps the largest battle in history up to that time).  One combatant named on the stone is Ahab of Israel (who WAS the son of Omri).  Another is identified as Hadadezer of Damascus (Syria), the king  elsewhere known (including in the Bible) as Benhadad II.

(This close-up of the stone lets you try your hand at reading ancient Assyrian cuneiform.  If you are much, much better at it than I am you might even see Ahab’s name. :))

If this begins to read like a Who’s Who of Biblical history during the time of the Divided Kingdom (or at least of the northern kingdom), then maybe we should pop across the Channel to Paris and visit the Louvre. 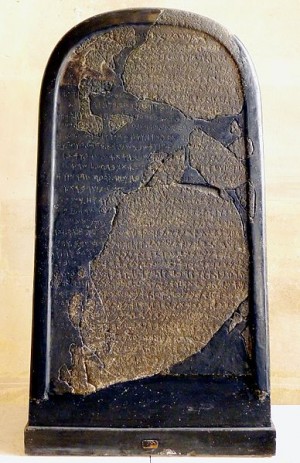 This is the Moabite Stone (or Mesha Stele) in the Louvre.  King David of Israel conquered Moab, but it regained its independence when the kingdom divided.  On this stele, Mesha, king of Moab, says his country was conquered and oppressed by Omri, king of Israel, and his son (presumably Ahab, though he doesn’t name him).

He claimed he had delivered his people by victory over Omri’s son, and thus Moab no longer paid tribute to Israel.

The Bible tells a different story — the rebellion was against Omri’s grandson, Ahaziah, right after the death of Ahab (when Israel was weakened after battle against Syria).  Ahaziah only reigned two years, and was replaced by his brother, Jehoram, who formed a coalition and invaded.  Moab was badly defeated, but Israel, Judah, and Edom withdrew in horror after Mesha sacrificed his son to his god Chemosh (II Kings 3).

The Moabite Stone contains the earliest known reference (outside of Scripture, of course) to Jehovah, the God of Israel.

Mesha couldn’t modify the Biblical record, but he could rewrite history for his people in Moab.  It’s a long tradition — powerful people rewrite history to make themselves look better.

Note:  Sometimes people who aren’t powerful rewrite their own history to make themselves look better.  Just as Mesha’s self-glorifying account is refuted by God’s records, ours will be, too, so we’d do well to avoid personal historical revisionism. 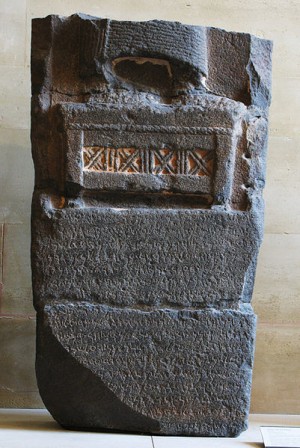 Since we are in the Louvre anyway, this is the Zakkur Stele.  Zakkur was a king of Hamath.  Zakkur is not mentioned in the Bible, but II Kings 14 tells us Hamath (in Syria) was defeated in battle by Jeroboam II (the thirteenth king of the northern kingdom, and great-grandson of Jehu, mentioned above).

On this monument Zakkur records that he was attacked by a coalition led by another familiar name to readers of the Old Testament — Barhadad (Benhadad) son of Hazael, king of Syria (Syria was also known as Aram and is so named on the stela).  This is not Benhadad II who was the frequent rival (and occasional ally) of Ahab (I Kings 20 – II Kings 8), but Benhadad III, the enemy of Joash king of Israel, as described in II Kings 13:3, 24-25.

Unless you are very familiar with the Biblical accounts (and even if you are), your head may be spinning by now trying to keep all these kings and places straight.  Perhaps a table to correlate the Biblical accounts with what we see on these monuments will help.  (Dates are all approximate, some more approximate than others. 🙂 They should be close enough to give a general idea of the flow of the Biblical history.)

The first two monuments above are Assyrian monuments.  The Assyrian collection in the British Museum is fascinating.  Due to their position as the great power near the land of Israel, and their invasions of both the northern and southern kingdoms, there are many intersections between the Assyrian monuments and the Biblical records.

These monuments were all intended to honour the kings who had them inscribed, to make those kings look good.  Now, there is no one left who cares about Shalmaneser III, or Mesha, or Zakkur, no one they need to impress any longer.  They’ve gone on, and will face their final judgment before a Court that won’t be swayed by royal propaganda.

And yet, their work lives on, serving another purpose, one they never intended.  Their “royal proganda” now honours the King of Heaven, for it confirms the accuracy of His written Word.  Two hundred years ago, people might have doubted whether there was any accuracy in the historical accounts of the kings of Israel — and some did doubt.  That doubt today can be seen to be very foolish, for these are but a few of the historical records discovered in the last two centuries that match up very well with the Biblical account.

People also doubt whether there is any accuracy in the historical accounts of the death, burial, and resurrection of the Lord Jesus.  The day is coming when that will be seen to be very foolish, as well.

Behold, he cometh with clouds; and every eye shall see him, and they also which pierced him: and all kindreds of the earth shall wail because of him. Even so, Amen.