The “Heretical” Pharaoh of Amarna

Amenhotep IV came to power in the 14th century BC, about 90 years after Moses led Israel out of Egypt (as described in Exodus 1-14).   He may have been co-regent with his father for a time, but by the fifth year of his reign, he was certainly ruling alone — and he was making changes.

In his fifth year as Pharaoh, Amenhotep abandoned traditional Egyptian religion.  The result was buried treasure in the desert, buried treasure for Egyptologists and for Biblical scholars, at a place now known as el-Amarna.

After Thebes led the successful rebellion against the Hyksos (A King Who Knew Not Joseph), the local deity of Thebes, Amun (or Amen / Amon, spellings differ), became merged with Ra (or Re), the sun-god, in Egyptian religion.  Thebes was the capital, the sun was the sun, and so among all the other gods of Egypt, Amun-Ra became preeminent (and his priests became very, very powerful).

Amenhotep IV decided to reject the established religion of Egypt, which worshiped many gods (led by Amun-Ra), and follow one god, Aten (or “the Aten”).  There seem to be differing expert opinions on the exact nature of this new religion, and it is hard to know why Amenhotep decided to make this change.

Perhaps he simply became convinced this one god was the only god, and was a true believer.  Perhaps he had fallen out with the priests of Amun-Ra, or simply wanted to limit their power.  Perhaps he had been influenced by the fact that all these Egyptian gods had been humiliated by the God of the Hebrews, who believed in only one true God, and so he thought belief in one god was the answer.  Perhaps he was even being influenced by letters which his father, and now he, had received from Canaan talking about those Hebrews (Amarna’s Letters of Despair — “Lost are the Lands!”).

I’ve even read speculation that Amenhotep had become a follower of the God of Israel in response to those events.  That seems very unlikely, and it doesn’t seem to fit with some of the evidence.  But for whatever reason, Pharaoh changed his religion — and when Pharaoh changes his religion, everyone is expected to follow.

Ingots & Rings from el-Amarna
© Trustees of the British Museum

Pharaoh made many changes.  He changed his name, Amenhotep, honouring Amun / Amen, to Akhenaten, honouring the Aten.  He created a new city, named it Akhetaten to honour the Aten, and moved the capital there.

There is some evidence that he was tolerant towards the worship of other gods at first, but he eventually closed their temples.  He disbanded their priesthoods, defaced monuments and inscriptions honouring other gods, and funds supporting their priests and worship went to the worship of the Aten.

One interesting aspect of the changes was in the way Akhenaten and other members of the royal family were portrayed artistically.  From the British Museum description of the sculpture above:

This face is easy to recognize as that of Akhenaten, even though only the lower part of it remains. Akhenaten chose to be represented in a manner very different from his predecessors. It was once thought that this was the true appearance of the king, and was the result of some kind of disease or disorder.  However, his wife Nefertiti and his six daughters were represented in a similar way and this suggests that the style was artistic convention.

There are various theories as to why Pharaoh chose to be portrayed in this way, but all we can know for certain is that he brought many changes to Egyptian religion and art.  (More details on the sculpture above). 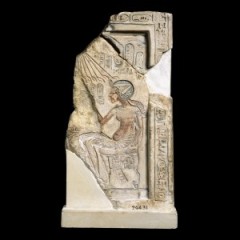 The British Museum description of this stela:

In the Amarna Period (1352-1336 BC) a major change of emphasis took place in some religious beliefs and in artistic style. This limestone stela illustrates the shift in both these areas of Egyptian life. The king, Amenhotep IV (Akhenaten, reigned 1352-1336 BC), is shown in a relaxed pose, which would have been unthinkable in earlier times, with a protruding chin and belly; he is seated below the disc of the Aten (the sun) whose rays extend down to the king.

The End of the Aten

Akhenaten named his son “Tutankhaten” in honour of his god.  Tutankhaten was very young when his father died, and others reigned for two or three years, but at the age of nine or ten, he ascended to the throne.

At about the age of 12, in his third year, either on his own or under the thumb of powerful courtiers, Tutankhaten repudiated his father’s changes.  He restored the priests of other gods and abandoned worship of the Aten.  Tutankhaten became Tutankhamun (now famous as “King Tut,” whose nearly intact tomb was found in 1922).  He returned the royal capital to Thebes — Akhetaten was completely abandoned.

Akhenaten’s temples to the Aten were destroyed, the stones used in building other buildings.  No one worshiped the Aten any longer.  No one went to the city he had built, which fell into ruin.  And six years later, when Tutankhamun died childless, Akhenaten’s line ended.

Akhenaten was considered a disgrace.  His images and cartouches were defaced.  He was written out of the lists of kings.  The only thing left was an empty city in the desert.  He was a forgotten relic on history’s scrap heap.  They didn’t even bother to take all his royal archives to the new capital — they left them in the desert at Akhetaten.

Everything he had tried to do had come to nothing.  His god, his city, his temples, his images, his family line — all had ended.  It all seems so pointless….

It may have all been pointless as far as Akhenaten was concerned, but what happened?

Did a sovereign God, who “worketh all things after the counsel of His will” (Ephesians 1:11), use the “heresy” of Amarna, the worship of the Aten, to preserve those letters for a time when His people would face challenges as to the truth of His Word?  Was it Amenhotep’s idea to build a city which the Egyptians would eventually abandon after the letters were received, or was there an unseen Hand at work?  Was it accidental that the only time something like this happened in Egyptian history resulted in the discovery of Egyptian royal archives, and that those archives are so relevant to a key time in Biblical history?

Was it random chance that caused those letters to be discovered during the rise of skepticism?  Is it just a freak occurrence, or the providential hand of a God with a sense of humour, that many prominent 19th century advocates of skepticism were German scholars, and most of the Amarna letters ended up in Germany?

Did the true God plan the Amarna letters, and move Egyptian royal behaviour to preserve them?  Or was it all just an amazing coincidence?

The king’s heart is in the hand of the LORD, as the rivers of water: he turneth it whithersoever he will.