Tartan and Rabsaris and Rabshakeh 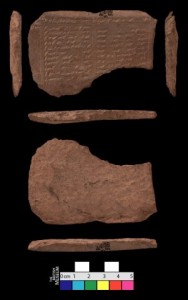 That title sounds like a rock band, doesn’t it? 🙂 Who are these guys, anyway?

The Bible says Sennacharib, the king of Assyria, sent “Tartan and Rabsaris and Rabshakeh” with an army against Jerusalem, but none of the ancient historians mentioned any such individuals.  (In fact, the ancient classical historians knew little of Nineveh, the Assyrian capital in Sennacherib’s time, either.)

It wasn’t until another “rock band” (the kind that digs among the rocks for ancient artefacts) took a hand that we learned the identity of these three men.  It ended a lot of confusion, including among Bible commentators, and (once again) archaeologists found evidence which backed up Biblical history.

The clay tablet pictured above was found in Nineveh in 1882.  Nineveh, the capital of Assyria from the time of Sennacherib until the collapse of the Assyrian Empire, was on the banks of the Tigris River, across from what is now Mosul in Northern Iraq.

The tablet lists a series of Limmuships.  Every year, a different official would preside over the New Year festival in the Assyrian capital, and he would be known as the Limmu for that year.  Assyrian records would indicate the year by the name of the Limmu.  Sometimes the king would be the Limmu, but it was a different official every year.  This tablet lists the Limmus for BC 858-847, during the reign of Shalmaneser III.  In 857, Shalmaneser himself was the Limmu.

If you want to know more about the Limmus and the Assyrian Eponym Lists, which tracked Assyrian history for over 200 years, you can take the time to read Marking Time from the Caeno Foundation.  But what does all this have to do with our “rock stars” above?

And the king of Assyria sent Tartan and Rabsaris and Rabshakeh from Lachish to king Hezekiah with a great host against Jerusalem. And they went up and came to Jerusalem. And when they were come up, they came and stood by the conduit of the upper pool, which is in the highway of the fuller’s field.

This passage names Sennacherib’s messengers to Hezekiah.  Among them was Tartan.

In the year that Tartan came unto Ashdod, (when Sargon the king of Assyria sent him,) and fought against Ashdod, and took it;

This verse says Tartan was sent to Ashdod by “Sargon.”  No ancient historian mentioned Sargon, and Bible commentators thought this was another name for Sennacherib.  Why?  “Tartan” worked for Sennacherib, and here he is working for “Sargon.” One of many examples is John Gill, who said, “This Sargon is generally thought to be the same with Sennacherib, since Tartan was one of his generals.”

Of course, when Sargon’s palace was found at Khorsabad, everyone knew that Sargon and Sennacherib are not one and the same.  And now, no one thinks the “Tartan” who served Sennacherib was necessarily the same man mentioned in Isaiah 20, either.

The clay tablet above tells the tale, for right under Shalmaneser, the Limmu for 856 BC, was “Turtanu” — not a person’s name, but the Assyrian title for the chief of the army, overseer of the brutal and violent Assyrian conquests.  When an Assyrian king sent Tartan with an army, he was sending his senior general.  Sennacherib sent “Tartan” — but so did Shalmaneser III, 150 years earlier.  (The tablet is not generally on display in the Museum, but you can click on the picture above to see a larger image on their website.)

And Rabshakeh said unto them, Speak ye now to Hezekiah, Thus saith the great king, the king of Assyria, What confidence is this wherein thou trustest?

Rabshakeh was the spokesman, best known of the three messengers.  In fact, Isaiah (in Isaiah 36-37) doesn’t even mention Tartan and Rabsaris — but Rabshakeh’s blasphemous message against the true God is quoted at length.

For centuries, nobody knew anything about Rabshakeh, either.  But the very next Limmu after the Tartan (in the list pictured above) was the Rabshakeh, in 855 BC.  This also was an official title, not a name.  The exact nature of his position is not known for certain (perhaps cup-bearer), but it obviously included a military role.

Sennacherib’s Rabshakeh was articulate in Hebrew.  He may have been an Israelite of the ten tribes deported earlier by the Assyrians — more than a century later, Nehemiah the Jew became cup-bearer to a Persian king.  Unlike Nehemiah, this high court official blasphemed against the Lord — if a Hebrew, he was a traitorous one.

Next comes Rabsaris, the third of this “lovely” trio.  Unlike the killer (Tartan) and the blasphemer (Rabshakeh), we know little about him — but he also turns up beneath the sands of Nineveh.

This heart-shaped clay tablet, shown from various angles, was a contract in both Aramaic and Neo-Assyrian.  It says “Hamatutu of Handuate” borrowed five homers of barley from the king’s son — at 33% interest!

The year on the contract is 645 BC — the “Limmu of Rabsaris Nabu-sar-usur.”  A man named Nabu-sar-usur was the Limmu — and held the post of “Rabsaris.”  Again, the exact nature of the position is unknown, but “Rabsaris” was another title in the Assyrian government.

Sennacherib wanted Jerusalem.  He sent three of his most important officials with his army to intimidate the Jews and Hezekiah.  They told them not to trust in the Lord, for no other gods had delivered their people.  From a human perspective, their message made sense — but the living God is not like those other gods, and Jerusalem did not fall.

The Book is Old, the History Right, the Prophecies True

The use of the titles Tartan, Rabsaris, and Rabshakeh in Scripture, as well as the naming of the Assyrian king Sargon II, shows the historical accuracy of Scripture — and more.

These individuals and titles were unknown by the time of Herodotus and Xenophon around 400 BC (and Xenophon traveled right past Nineveh).  If Isaiah had written later depending on common knowledge, he would have been wrong.  No one knew about Tartan or Sargon later.  The only way Isaiah could get these right is if he wrote at the time of the events he describes.  Isaiah was not a later invention of “prophecies” that were “post-diction rather than prediction.”

The prophecy of exile in Babylon came in the time of Sargon, many decades before Babylon became a world power.  Writing in the time of Sargon and Sennacherib, of Tartan and Rabshakeh, more than 150 years before Cyrus of Persia, Isaiah named Cyrus specifically.  When Cyrus came to power, only Scripture and buried rocks knew about the guys in this “rock band.”  When people knew about Sargon, only the Scriptures knew about Cyrus.  The same writing names both.  The only explanation is divine intervention.

As with Belshazzar, as I noted earlier in this series, the memory of Sargon, Tartan, Rabshakeh, and Rabsaris disappeared for over two millennia.  That not only validates Scripture’s historical accuracy, it proves the amazingly precise predictive prophecies were written long before human prediction was possible.  They were predictions fulfilled in the sovereign working of an Almighty God, who also sovereignly judged Nineveh in such a way that this evidence of Scripture’s accuracy and authority would sleep beneath Iraqi desert for two and a half millennia, only to awaken for our times.

Companion post:
“O Assyrian, the Rod of Mine Anger!”
“He Carried Them Away” — Ashtaroth / Astartu

7 Responses to Tartan and Rabsaris and Rabshakeh