Catechism For the Christian View of Mathematics

In my last post (Mr Z and the Christian View of Mathematics), I told how my high school maths teacher, Mr Larry Zimmerman, taught us to see mathematics as it is, one of the ways God revealed different attributes of Himself in His awesome work of creation. 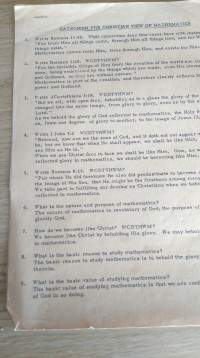 I mentioned in that post the “dreaded brown sheets,” Mr Z’s “Catechism for the Christian View of Mathematics.”  We had to be prepared to answer questions from this catechism on our regular mathematics exams.

Here, then is Larry Zimmerman’s “Catechism.”  I guess this may have developed somewhat through the years, there are a few changes in the online version, which is in the second appendix of his book.  This, though, is my blog 🙂 , so you get my copy, the one I learned all those years ago, from those “dreaded brown sheets.”  The later version develops a few of these questions a little more completely, or frames the questions and answers more clearly, but I feel an attachment to those brown sheets, so here it is as we learned it.

1. Write Romans 11:36.  What connection does this verse have with mathematics? (hereafter WCDTVHWM?)

“For of him, and through him, and to him, are all things: to whom be glory for ever. Amen.”
Mathematics comes from Him, lives through Him, and exists for Him.

“But we all, with open face beholding as in a glass the glory of the Lord, are changed into the same image from glory to glory, even as by the Spirit of the Lord.”
As we behold the glory of God reflected in mathematics, the Holy Spirit conforms us, from one degree of glory to another, to the image of Jesus Christ.

“Beloved, now we are the sons of God, and it doth not yet appear what we shall be, but we know that when He shall appear, we shall be like Him, for we shall see Him as He is.” When we see Christ face to face we shall be like Him.  Now, as we behold His reflected
glory in mathematics, we should be becoming like Him.

“For whom He did foreknow He also did predestinate to become conformed to the image of His Son, that He might be the firstborn among many brethren.”
We take part in fulfilling our destiny as Christians when we behold God’s glory reflected in mathematics.

6. What is the nature and purpose of mathematics?

We become like Christ by beholding His glory.  We may behold His glory reflected in mathematics.

8. What is the basic reason to study mathematics?

The basic reason to study mathematics is to behold the glory of God reflected therein.

9. What is the basic value of studying mathematics?

The basic value of studying mathematics is that we are conformed to the image of God in so doing.

“So then faith cometh by hearing, and hearing by the Word of God.”
The spiritual sight (faith) we need to behold God’s glory reflected in the mirror of mathematics comes from the word of God.

11. Write a verse which implies that God created mathematics.

Romans 11:36 “For of him, and through him, and to him, are all things: to whom be glory for ever. Amen.”
John 1:3 “All things were made by him; and without him was not any thing made that was made.”

12. Write a verse which implies that God’s glory is reflected in mathematics.

Romans 1:20 “For the invisible things of him from the creation of the world are clearly seen, being understood by the things that are made, even his eternal power and Godhead; so that they are without excuse:”

14. Give an example from mathematics which reflects the infinity of the Creator.

15. Give an example of a unifying element in mathematics.  Why are we not surprised to find these?

Sets, vectors.  Because one Person created the whole thing.

16. How do we know that God created mathematics?

The Bible says so.

17. Write a verse which gives the source of the faith we need to behold God’s glory in mathematics.

Romans 10:17 “So then faith cometh by hearing, and hearing by the Word of God.”

18. What is the main value of studying applications of mathematics?

To be sure we are dealing with true mathematics, created by God, and not with the product of some man’s vain imagination.

19. Give one example of the power of God reflected in mathematics.

Solution to an equation.  Rocket to the moon.

20. A non-believer says, “Man invented mathematics.”  How would you argue against him?

Mathematics is an abstraction (or model) of nature, which man obviously didn’t invent. So many different people in different parts of the world at different times contributed to mathematical thought that we would expect it to be disjointed and fragmented.  Instead, there is unity and universality.

21. How does coordinate geometry remind us of the Creator?

It demonstrates the unity between geometry and algebra, which we expect to find because one Person created both.

22. Write Romans 1:20.  What are the “invisible things” mentioned in this verse?

23. Write Romans 1:20.  What two meanings could be assigned to the phrase “from the creation of the world”?

“For the invisible things of Him from the creation of the world are clearly seen, being understood by the things that are made, even His eternal power and Godhead, so that they are without excuse.”
Ever since the time when the world was created; from the physical features of the creation.

24. How can you tell whether a statement is true mathematical discovery or simply the product of someone’s vain imagination?

25. A Christian student says of math, “Why do we have to study this junk?”  What would be an acceptable answer?

What God has created call not thou junk.

Mathematics is the “glass”
Romans 1:20

27. Comment on this statement from a Christian high school teacher.  “A triangle resembles the Trinity — it is the strongest geometric figure.”

We look for the revelation of God’s glory implicitly in math; not for an object lesson.  Also, it is very dangerous to say that the Trinity resembles anything.

An entity which always exists in the mind of God, for us the universal expression of His creative and sustaining word of power.

This last point, #28, was handwritten on the sheet, showing that Mr Z was still learning and developing his understanding of our God and His mathematical handiwork, even as he was instructing us.  It was the “present” column from #26 above in action.

And this is the main reason I decided to go ahead and post this old form of the catechism, rather than the new.  Mr Z taught us, and lived it himself, to learn of our God from His creation.  If he continued to do that, of course he would continue to develop his thinking on this topic.

That Mr Z’s catechism, despite being fundamentally the same, developed over the years simply demonstrates the truth of what he taught.  If we keep looking for the things of God, we will keep learning more and more of them, whether in mathematics or something else.  He did that, as these two copies of his catechism illustrate.  Now that you’ve read this old version, you really must go and read the new.

Former Pastor of Free Baptist Church of Glenrothes
View all posts by Jon Gleason →
This entry was posted in Daily Christianity, The Christian and Culture and tagged Christian Education, Creation, Larry Zimmerman, Mathematics. Bookmark the permalink.

8 Responses to Catechism For the Christian View of Mathematics