The Withered Fig Tree — Nothing But Leaves

As we look at the account of the fig tree which Christ cursed on the Monday before His crucifixion, I’ve taken two articles to cover the Old Testament Symbolism behind the event and a related parable of Christ from a year earlier.  With those things in mind (and if you haven’t read them, please do), today I’d like to close off our study of this event.

12 And on the morrow, when they were come from Bethany, he was hungry:
13 And seeing a fig tree afar off having leaves, he came, if haply he might find any thing thereon: and when he came to it, he found nothing but leaves; for the time of figs was not yet.
14 And Jesus answered and said unto it, No man eat fruit of thee hereafter for ever. And his disciples heard it. 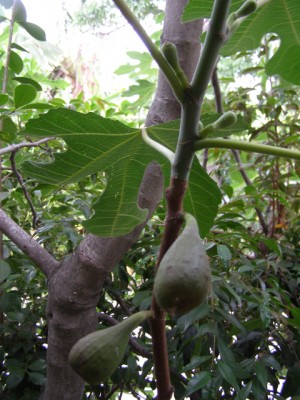 Some of the confusion around this event is caused by simple ignorance of the fig tree.

I once read an article written by an unbeliever which said Jesus had cursed the fig tree simply because He was angry at a tree for being normal — the leaves appearing before the figs.  This was based on ignorance of the normal cycle of the fig tree in Israel.

Jesus did not curse the tree because He was angry, of course.  That ignores the symbolism and the background.  I don’t suppose we can expect a scoffer to consider such things, anyway.  But a basic knowledge of the fig tree would have prevented the writer from making a fool of himself, for if the tree had been producing normally, there would have been breba figs in the spring.

The common fig bears a first crop, called the breba crop, in the spring on last season’s growth. The second crop is borne in the fall on the new growth and is known as the main crop.

As you can see in the picture, the breba fruit is hanging down from the branches while the second crop (much smaller at this time of year), above the breba, is just beginning to appear.  If a tree was leafed out, the breba (or lack thereof) would not be visible, it would be under the leaves, but breba would be expected.

The time of the spring fig harvest had not yet come (verse 14).  But the breba figs certainly should have been present by the time of Passover.  Jesus found no breba — “He found nothing but leaves.”  The fruit of the later harvest, which though small at this time of year (as the picture shows) should have been appearing, was not there, either.  This tree was good at producing leaves, it had the the appearance of health, but it was producing no fruit at all, neither the early harvest nor the late one.

A Parable in Action

Jesus was a Master teacher.  He used parables in His teaching, stories which would find an answering chord in the heart of His hearers by using things with which they would be familiar.  He used these stories to illustrate spiritual truths, just as a preacher today will use an illustration in a sermon (though none of us can come up with illustrations to match the parables of Jesus, of course).

The day before (known as Palm Sunday), Jesus entered into Jerusalem to the acclaim of the crowds.  It must have all looked so good to His disciples.  At last!  They knew He was the Messiah, and now the nation was going to accept Him, too!

It was all a fraud, a fig tree with plenty of leaves, but no fruit.  The Old Testament symbolism of the blessings of fruit-bearing fig trees was not the immediate future of the nation — quite the contrary.  An extra year had been granted the fruitless fig tree of Israel, the year was ended, and it still bore no fruit, early fruit or later, despite appearances.

Jesus cursed the fig tree.  He didn’t do it because He was angry that He didn’t get a fig.  He did it as a parable in action, a living (and for the tree, dying) illustration of God’s judgment on a hypocritical nation, a nation which gave the appearance of belief, of multitudes that acclaimed Him as the Son of David, but would be replaced in half a week by a multitude crying, “Crucify Him!”

Jesus judged the fig tree, and went on into Jerusalem, into the city He would judge.  He cleansed the temple, just as He had done once before — it had to be done again, in this faithless, leaf-bearing but not fruit-bearing nation.  The leaders of the hypocritical nation plotted to kill Him (Mark 11:18).  He judged the fig tree, and the next morning (Mark 11:19-21), on “Passion Tuesday,” His disciples saw the withered fig tree, symbolic of withered Israel, as they walked into Jerusalem again, this time for Him to face the full and open hostility of religious leaders of every stripe.

Even fig leaves (and palm leaves) could not hide the wickedness and hostility.  “Palm Sunday” and the acclaimed Messiah were already a distant memory, prophesied and fulfilled, yet having no real place in the hearts of a fruitless nation.

Pastor of Free Baptist Church of Glenrothes
View all posts by Jon Gleason →
This entry was posted in Rightly Dividing and tagged breba fig, Israel, judgment, Mark 11. Bookmark the permalink.