“Whose is This Image and Superscription?”

On the Tuesday just before His crucifixion and resurrection, the religious leaders met our Lord with a series of questions — including one about tribute to Caesar.  (The account is in Matthew 22:15-22, Mark 12:12-17, and Luke 20:20-26.)

Many people think Christ’s response was intended to teach the separation of church and state.  If we take ourselves back to first century Jerusalem and take a close look at a Roman denarius (tribute coin), we might see a different focus.  A denarius is on display in the British Museum (room 68, case 3, panel 3).

“Show Me the Tribute Money” 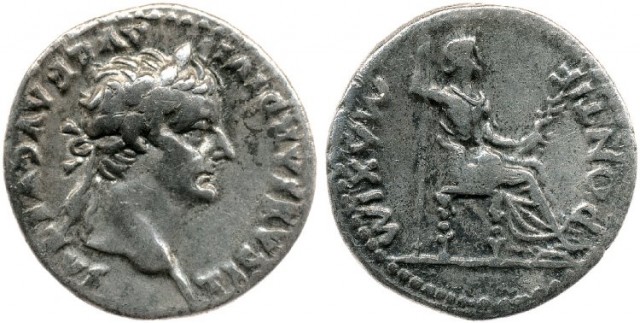 18 But Jesus perceived their wickedness, and said, Why tempt ye me, ye hypocrites?
19 Shew me the tribute money. And they brought unto him a penny.

The Greek word for “penny” is denarius, a Roman coin.  The British Museum has many denarii.  I don’t know if this picture is the coin in room 68, but the Tiberius denarii are all similar (details).  They show Tiberius Caesar, the emperor when Christ was crucified.  He had reigned for almost twenty years, so many denarii in circulation would have been his, and the coin they brought to Jesus probably looked exactly like this.

The Reverse of the Coin

Although our Lord apparently focused on the front, the back also is interesting.  The seated woman may be Livia (wife of Augustus and mother of Tiberius), Justitia (goddess of justice), or Pax (goddess of peace).  Given the religious inscription, it might be Livia portrayed as a goddess — flattery is not a modern invention, after all. 🙂

The inscription “PONTIF MAXIM” is a shortened version of “Pontifex Maximus,” the high priest of the idolatrous Roman state religion (ironically, the popes now informally use this title).  By the time of Tiberius, the emperor was the high priest.  “PONTIF MAXIM” on the coin claimed imperial authority over worship.

The Image on the Coin Front

The head is Tiberius Caesar with a laurel wreath.  The Romans held a “triumph” to celebrate military victories, a parade to display the captives and spoils of war and honour the victors.  The conquering commander would wear a laurel wreath.  The coin honours Caesar’s authority as a conqueror.

By asking, “Whose is this image?” the Lord Jesus drew their attention to this image and forced them to acknowledge it as Caesar’s.

The inscription called Tiberius the son of a god, Augustus, and also “Augustus” himself.  The primarily religious title “Augustus” meant “majestic.”  Tiberius was a step-son and (later) an adopted son of the (so-called) divine Caesar Augustus, but this coin claimed the “divine” role / title “Augustus” had passed down to Tiberius.  “Augustus was divine, and now I his son am Augustus.”  Not a son genetically, he claimed to be a son in divinity.

The worship of the emperors as gods was not as fully developed as it would be later, but the inscription claimed divinity for both Augustus and his adopted son.  Jesus drew their attention to the inscription, as well as the image, before He answered their question.

Note:  There are other theories as to the coin brought to Jesus.  One Augustus denarius (calling Augustus “divine”) was also still common.  But the image was identified as “Caesar,” and Tiberius had been Caesar for many years, so it is likely that the coin was, indeed, a Tiberius denarius, as pictured above.  It is almost certain that the coin claimed divinity for the emperor, probably the current emperor, and that this is the reason Jesus drew attention to the inscription.

The men who came to Jesus with this question thought they were putting Him in a bind, that whatever He answered they would have Him in trouble.  Either they could denounce Him to the Romans as a rebel for encouraging non-payment, or they could denounce Him to the people as a supporter of Rome, if He said to pay the unpopular tax.  He would either be arrested or the people would rise against Him.  Either way, they had Him now.

Some err, however, in interpreting this passage as if Jesus simply gave a clever answer to wriggle out of their trap.  If that were the case, they could still have denounced Him to the people, since He was indeed saying to pay the tribute.  They wouldn’t have gone away silenced if He said something they could use….

Nor do we do the passage justice if we say Jesus simply gave these evil hypocrites sound Biblical teaching on the relationship between civil and religious responsibilities.  He wasn’t giving counsel to believers for living under godless government — they weren’t looking for wisdom.  Nor was He just using the coin as a visual prop in His teaching.

We have to remember that the “tribute money” was an idolatrous coin.  It bore a graven image of a false god (remember the Second Commandment?) on both sides.  It claimed Tiberius had authority over worship.  It proclaimed a man to be divine, a false god.

A few years earlier the Jews rioted when Herod put a golden eagle over the gate of the temple, but they seem to have had few qualms about money.  They would buy and sell with idolatrous coins and acquire as many as they could.  But in paying tribute, suddenly they were “servants of God,” not of Caesar, and so the “righteous” thing was to refuse to pay.  It was fine to stockpile coins affirming Caesar’s conquering authority, but not to pay the tax he demands.  They brought, to the only begotten Son of the true God, a coin honouring an adopted step-son of a false god, and wanted His permission to hoard it instead of paying what was due.

Jesus didn’t just call them “hypocrites” for the satisfaction of telling them off.  He made them present the coin (and acknowledge its nature) to show clearly their hypocrisy.  It wasn’t love of God that made them hesitant to pay the tribute, but love of money.

The text looks different when we understand just how idolatrous was the tribute money, just how much authority those who used the coins were conceding to Caesar.  When they accepted those coins in trade and business transactions, they were granting value to an idolatrous coin that claimed them as subjects.  Remember that when reading the passage:

15 Then went the Pharisees, and took counsel how they might entangle him in his talk.
16 And they sent out unto him their disciples with the Herodians, saying, Master, we know that thou art true, and teachest the way of God in truth, neither carest thou for any man: for thou regardest not the person of men.
17 Tell us therefore, What thinkest thou? Is it lawful to give tribute unto Caesar, or not?
18 But Jesus perceived their wickedness, and said, Why tempt ye me, ye hypocrites?
19 Shew me the tribute money. And they brought unto him a penny.
20 And he saith unto them, Whose is this image and superscription?
21 They say unto him, Caesar’s. Then saith he unto them, Render therefore unto Caesar the things which are Caesar’s; and unto God the things that are God’s.
22 When they had heard these words, they marvelled, and left him, and went their way.

That idolatrous coin?  That is Caesar’s, and he can have it — God certainly doesn’t need it.  People still might not want to pay the tax — but they won’t fault a Teacher for showing the idolatry and rebuking hypocrisy.  “They marvelled” — not only had their perfect trap failed to trap the Master, He had turned it back on their own hypocrisy.

But there is more here.  Lord willing, I’ll write again on this Scripture later this week.

Follow-up on this passage:  Misusing Matthew 22:21:  “Render Unto Caesar”

7 Responses to “Whose is This Image and Superscription?”